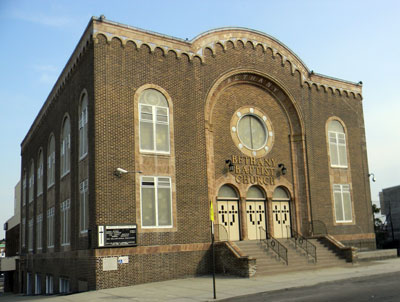 The historic records of the earliest beginnings of our church were not preserved over the years. Taking the verbal accounts of those who recalled the church’s inception, these facts were ascertained: that the church was established by Reverend G.C. Coleman, former pastor of the Mt. Carmel Baptist Church.  There were several dates mentioned as the the date of inception of the Bethany Baptist Church. The years were 1904 and 1910.

Upon checking the minutes of the Mt. Carmel Church, we learned that Reverend G.C. Coleman served as pastor of that church until 1910. He could not have logically established Bethany under his leadership until he resigned his duties as  the pastor of Mt. Carmel.

On the third Sunday of May, 1925, the Bethany Baptist Church- consisting of five members meeting on the third floor in a building on Arch street near fifty -sixth street- called the reverend James H. Saunders to its pastorate.
From 1926 to 1933 the church worshiped in a rented building at 3909 Haverford Avenue; and from 1933 to 1937, an abandoned pool hall in the same vicinity served as  our worship center. On the first Sunday of September , 1937, we moved into a home converted for church use at 5032 Brown Street. Bethany purchased this building and remained there to worship until the first Sunday of July, 1946. On this date Bethany marched into the edifice at 4238 Wallace Street, which was purchased on June 4th, 1946 from the Episcopal Diocese of Philadelphia.

Under the leadership of the late Reverend James H. Saunders, Bethany grew, developed, and became an important Baptist witness in the city. Reverend Saunders went home to be with the lord in January, 1958, after having served for thirty – three years.

On December 31,1958, the church called on Reverend Alpheus L. Bright, Sr., who at the time was the assistant to Reverend Frank B. Mitchell, Pastor of the Pinn Memorial Baptist Church. Reverend Bright assumed the pastorate on Sunday, February 1, 1959.  On the third Sunday of November, 1970, we moved from 4238 Wallace Street to our present location, 5749 Warrington Avenue. After moving to this location, under the leadership of Pastor Bright we expanded our physical plant so as to become a more viable Christian fellowship.

After forty two years of service Pastor Bright retired to the status of pastor emeritus after organizing a successful national search for a new pastor. On November, 2001, Reverend Myron D. Barnes, Sr., was called to become our pastor. Since becoming our pastor, Reverend Barnes has instituted a number of programs, ministries, and a capital expansion project in order to build upon Bethany’s significant  Baptist witness to the community in the 21st Century and beyond.